“We cannot direct the wind but we can adjust the sails”, oh how true and in all manner of ways.
Twice in the last week we have done just this, first from Astypalia to Santorini and then Santorini to Crete.
We had come from Rhodes, Symi and Nisiros to Astypalia, one of my favourite islands. The Chora with its Venetian castle at the summit and the windmills on the ridge is hard to beat and we had a couple of good days here when laundry was done and we re fuelled and watered.
We left Astypalia with the intention of getting to Santorini (Thira or Thera) but the journey would have been under engine and into wind, a noisy bounce through oncoming seas so, heeding the proverb we adjusted our sails and set our course to the north west and had a beautiful sail to the west coast of Amorgos where a known and lovely shallow peaceful bay awaited. The next day we motored across in flat calm to Santorini – sometimes there is no option! 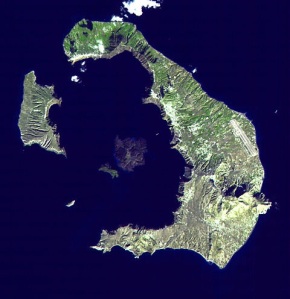 Entering the caldera from the north we pass Nisos Thirasia to the west and high above us to the east is the town of Oia, ahead in the middle the dark brooding shape of Nea Kameni (New Burntisland), I think we’ll stick with our one especially as this island is still active with smoulders and smells. The scale is awesome. The striations and colours of rock so impressive – layers of russet and black, white and brown, dark, dark boulders, sheer, sheer drops, inky mysterious waters, like a Rothko painting with its gradations of colour and then above, under the blue sky, the brilliant white cubed settlements, like icing falling off a cake. 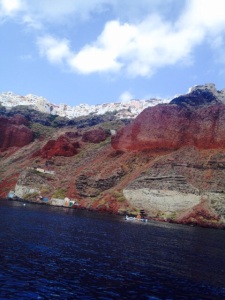 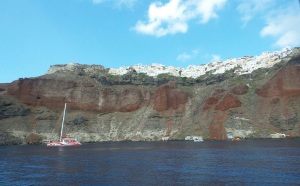 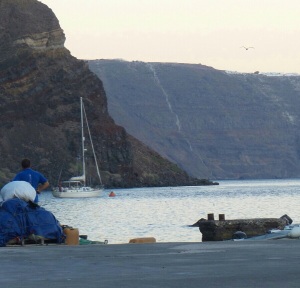 We couldn’t have had more of a contrast from where we took a buoy off a place called Armeni to the rather smart polished town of Oia that peered in a superior manner down on us. Armeni was a tumbledown collection of a few little buildings, boat houses tunnelled into the cliff and fishermen’s huts, a dive centre and a small taverna where we, having got the taste for raki in Rhodes and like to ‘down’ one and then follow with a more measured sip, tried to order four little glasses but ended up with a carafe! Needless to say we left before finishing, donating it to another table.
We were lucky that the day we arrived donkeys or mules were positioned at the base of the cliff and without hesitation I mounted Julia Ferrari to take me lumpy bumping up the hill, Andy followed behind sometimes overtaking but also on a donkey/mule also called Julia Ferrari. It was a highlight for me that ride, I loved it! Once up we admired the views, the smart shops, the galleries and the clothes and jostled with people who had come to admire the sunset. We found a perfect view down to where Selkie Dancer was moored, over infinity pools and boutique hotels and enjoyed a dirty martini. 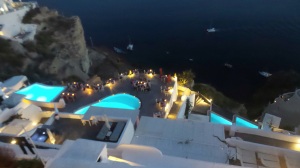 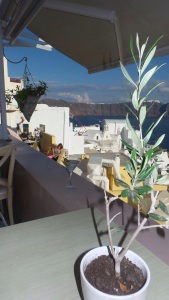 What a massive explosion it must have been, four times bigger than the large eruption at Krakatoa in 1883, and sending shock waves of tsunami around the Mediterranean possibly responsible for wiping out the Minoan civilisation thriving in Crete. The discovery in 1967 of a whole city, Greece’s Pompeii, buried in the fallout, preserved in a moment in time, store rooms full, possessions abandoned, Thera’s city at Akrotiri was smothered. It must have been terrifying for the local population, although used to living with a rumbling partner over the years they must have had a warning that something really big was going to happen – the Gods were very angry – for they left their homes to escape. I don’t suppose they stood a chance. No bodies or livestock were found in the remains. What a fantastic gift for archaeologists. Frescoes, now in the archaeological museum but reproduced in an exhibition in Fira (The Chora) showed amazingly detailed scenes, ‘The Flagship of the Fleet’ with dolphins leaping around, oarsmen rowing, and the helmsman steering.  Others showing boys with fish – quite contemporary really, shaved heads and a small pigtail!  Also monkeys clambering & playing.  Now you can visit, walk around their streets, peer into their houses and imagine their life, it seems to have been a peaceful farming, fishing and trading community – no weapons were found.

The next adjustment of sail was pretty dramatic.
We had anchored in the south of the island amidst a nest of large catamarans doing a swim and BBQ lunch stop, were alone for a few hours to prepare for the nights passage, then the fleet returned to surround us once again and once again we were left alone to contemplate the journey ahead. We were expecting strongish winds so put three reefs in the main, so making the sail quite small. Andy set up Scarlet the hydrovane and off we set. She did a fantastic job silhouetted against the two metre surf in a F 5/6 sometimes F7, wanging drunkenly from horizon to horizon steering us on a steady course for Crete.
The first drama was a light we thought was a ship but soon realised was a rock we hadn’t noticed because – excuses! – we were on the join between two maps – do you buy that?! Anyway that little obstacle safely out manoeuvred we carried on in the dark, no moon yet, Andy having a rest me on watch. Then the kindly moon came out and stars freckled the night sky before cloud won over and only intermittently did we see the moon. Andy took over and I went below to the noisy bouncing vibrating shell, horribly aware of how thin the fibreglass skin of the boat is and hearing the water sloshing and swishing by. I tried not to think of it too much but closed my eyes and felt that I was being lifted by four unevenly matched people on a palanquin going down a steep hill for five steps then lurching back up five steps, honestly I’m amazed I slept at all but I think I got a couple of hours. And so it continued until dawn when the massive lumpy shape of a Cretan hill began to loom ever near and our course was adjusted to avoid it and then on the radio a call to say that at 0630 a guided missile firing was going to take place – oh great! We were in the middle of it! After a few tense attempts at reaching the control on the radio we got through and they told us to continue south and inform them when we were south of a certain latitude. And dear Andy says “I always wanted to see a missile firing from here” – NO YOU DIDN’T!!! and we didn’t!
So we arrived in Soudha Bay, no response from the radio at our request to enter this purportedly prohibited area. We are on an unprepossessing pontoon, lazy lines all muddled or broken so we have anchored. There are a sprinkling of boats like us here but we were zonked zombies for the whole day, had no energy and just slept and slept.
But now Crete awaits and we are excited.